Third Wave Coffee and the Formation of Taste (and Value)

“Orange blossom, white tea, syrupy”
“Grapefruit, spicy pepper, olive oil”
“Chocolate, red berries, roasted barley”
The language used to talk about new high-end coffee comes straight out of the wine world, with exotic and evocative descriptors and even a 0-100 grading scale (à la Robert Parker). Scores above 80 mark “specialty” coffee (such as would be served at Starbucks) and scores in the high 80s and breaking 90 place beans in the rarefied world of Third Wave coffees that retail for $5, $6, $7 a cup and more than $25 a pound for roasted beans (although usually sold in 12oz, or increasingly 6oz, packages to both stress the limited supply and make the price tag slight less eye-popping).
Virtually all high-end coffees are of the species Arabica; among Arabicas there are a range of different varieties. A growing number of exclusive lots of green coffee have sold for more than $100 a pound, a ceiling first broken in 2007 by the storied Geisha varietal from Hacienda La Esmeralda in Panama. In 2012, a Mocca (a heirloom varietal originally from Yemen) grown by the Finca El Injerto in Guatemala sold for $500.50 a pound, still a record. (Meanwhile, the commodity price for quality washed Arabica, known as the New York C price, has fluctuated between $1.13 and $1.46 over the first 8 months of 2016)
Are these coffees worth that much? People often ask me this when I talk about Third Wave coffee. If you haven’t tried one yet, it is a different experience than either the office kitchen’s K-cup or even a solid cup of coffee from most neighborhood coffee shops. A whole range of subtle flavors come out in the clean, smooth, balanced cup profile; sugar and milk are, naturally, verboten.
Yes, but are they worth the high price? It depends on how we value them. In high-end markets that move toward singularity (limited edition prints, that particular Bordeaux vintage, the 2012 El Injerto Mocha), normal market forces of supply and demand don’t apply. Which leads us to consider what constitutes value for such non-commodities and how do we put a price on that.
Objective quality (by established tasting standards and conventions) and market scarcity play an important role, but we cannot discount the symbolic values at play: the relative positioning of conspicuous consumption; the imagined, personal relationship with a producer; and underwriting it all, the cultural and market shift among the global affluent toward artisanal and singular products. The language used to talk about Third Wave coffee borrows heavily from fine wine, ideas of terroir, and the artisanal food movement. And this provenance, these narratives, are key to its value.
Three Waves
The first wave of coffee consumption lasted from the late nineteenth century up through the 1960s, marked by the spread of commodity coffee and the rise of Folgers, Maxwell House, and all the other familiar grocery store brands.
The second wave started in the 1960s in the U.S. with Peet’s in San Francisco and Zabar’s in New York, and culminating in the spread of Starbucks to every nook and cranny of the country, and increasingly the world. Anthropologist William Roseberry describes this as a shift from coffee as being the beverage of capitalism (coffee and sugar serving as great proletarian hunger killers, as Sidney Mintz has pointed out) to being a beverage of postmodernity (an outlet for performing identity and difference).
The Third Wave coffees take this to the next, artisanal infused, level. Coming out of coffee shops in Portland, Brooklyn, San Francisco, Nashville, Washington, Philadelphia, and other cities, Third Wave has both hipster and foodie associations; it is sold by online retailers such as Stumptown, Intelligentsia, and Blue Bottle.
Creating Taste and Value
The Specialty Coffee Association of America (SCAA, the trade group for specialty and Third Wave coffee) goes to great lengths to bolster the scientific credibility of its classifications and tasting protocols. The more objective they seem, they more they can impart the power of authenticity (discovering something rather than constructing it).
The SCAA-associated Coffee Quality Institute certifies coffee cuppers with its Q Grader certification, with applicants having to pass five “triangulation cuppings” to differentiate a total of 90 distinct coffees. A Roast magazine article on the allure of triangulated cupping, observes that even a novice will quickly learn to distinguish coffees from different world regions, then so after by country. For example, “a Latin American coffee is going to taste different than an African coffee,” and tasting them side by side reveals the differences. “Put an Ethiopia Harrar into two cups and Sumatra Mandheling in one cup, and you will know the difference,” the article claims. Or, at least, you will learn the differences in going through a cupping protocol. One Portland roaster loved “the earthiness of the Sumatra” and another noted that Central American coffees are known for an exceptionally clean acidity (Allen 2010: 58). 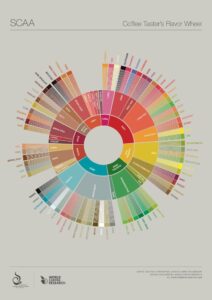 In 2015 the SCAA unveiled a new flavor chart for specialty coffee. Working with researchers at UC Davis and Kansas State, the Coffee Taster’s Flavor Wheel offers a lexicon of coffee terms coming from “the frontiers of sensory science methods and analyses.” They described the process using technical language (“an Agglomerative Hierarchical Cluster (AHC) analysis was performed on the results from the sorting exercise to group the flavor attributes into different categories (or clusters) represented visually by a dendrogram”) (Sage 2016).
The flavor wheel ranges from Chamomile, Rose and Jasmine to Vegetative and Herblike to Petroleum, Skunk, and Pipe Tobacco.
In order to calibrate such flavors, the accompaning guide gives references to ground a 0-15 scale of intensity. For example, one entry reads:
BLACKBERRY: The sweet, dark, fruity, floral, slightly sour, somewhat woody aromatic associated with blackberries
REFERENCE: Smucker’s Blackberry Jam
INTENSITY: 5.5
PREPARATION: Serve jam in a 1-ounce cup. Cover with a plastic lid.
Recently, among trendsetters there has been a shift in preference away from the more traditional deep, creamy chocolate flavors (and maple syrup, caramel, red wine) toward more floral and citrus notes.
The Cup of Excellence program has taken cupping standardization to the next level, as my colleague Bradley Wilson has observed. In Cup of Excellence competitions, each coffee will be blindly evaluated 5 times by different cuppers.  Only coffees that get consistently high scores advance in the competition, and out of hundreds of entrants each country will have 25-35 ranking winning coffees that are sold at a live internet auction.
Guatemala is ground zero for Third Wave coffee. This is due in part to its unique geographic and climatic endowments. High altitude coffees tend to command higher premiums, and Guatemala’s volcanic slopes and varied microclimates create a range of subtle flavors. But it was also visionaries such as Bill Hempstead, who as president and a director of the Guatemalan Coffee Association (Anacafé), promoted the branding of regional cup profiles which has led to the flourishing of single estate and micro-lot coffees.